Do You Have Toxic Emotions? Here’s How You Can Get Rid of Them

There’s a difference between experiencing the emotion and expressing the emotion.  Immature, childish people don’t know the difference.  So they end up erupting like volcanoes.

You see, there are no bad emotions, only bad expressions of the emotion.  For example, anger is not bad.  But some of the expressions of anger are bad.

But here’s my strong recommendation: Feel your negative emotions in the presence of God.  Tell God you’re angry.  Or worried.  Or afraid.  Or sad.

First, emotions are teachers.  They’re the windows of your soul.  Emotions help you understand what’s happening inside you.

Let me give you an example.  Let’s say a new officemate—barely two years old—is outshining you.  And the boss praises her to high heavens.  You smile on the outside, but deep within, you feel threatened.  You desire to put her in her place.  You feel jealous.  Friend, that jealousy is a teacher.  It is teaching you that you have an inner wound that needs to be healed—you’re jealous because your self-worth is based on what other people say about you and on your position, your job title…  not on the immovable, unshakeable  love of God for you.

One day, a widow called me up and asked me for help.  She said that a preacher visited the wake of her husband and told her, “Your husband is in Heaven.  Rejoice!”

He also brought a music ministry who asked everyone to sing, “Alive, alive, alive!”

Don’t Go Beyond the Expiry Date

But all negative emotions have an expiry date.  After the expiry date, it becomes poison.

So what do you need to do?

Toxic emotions can be harmful to your health, you may begin to experience depression and even problems with an erection and you have to take Viagra.

Michael did two things to them that I found amazing.

First, he asked the prisoners, “Try to make me angry.”

He allowed them to shout at him, curse him, and insult him.  And that’s what they did.  As you can imagine, the prisoners were experts in insulting people.  They cursed him in seven languages.  Their cursing vocabulary was extensive.  But during the entire time, Michael just sat there in front of them, smiling.

After they spent all their energy, he told them, “Nothing you say to me can affect me.  I’m uninsultable.”

He was teaching them to OWN their anger.  He told them, “You can’t blame anyone for your anger.  No one has the power to make you angry unless you give them that power.”

If you don’t own your emotions, the opposite will happen: your emotions will own you.  You’ll be the puppet of your emotions.  Sadly, that’s the reason many people are unsuccessful in life.  They’re puppets to their anger, their sadness, their fear, their guilt, their hurt, their greed, their lust, their pride…

Starting today, I ask you to stop blaming circumstances for feeling the way you feel.  You allowed yourself to be angry.  Or sad.  Or fearful.

The next exercise that Michael did was amazing…

Michael also asked the prisoners, “Make yourself angry.  Raise your anger level to a 10.”

And that was pretty easy for the guys.  They really started shouting and screaming.  (He always had burly guards beside him, just in case they went out of control.)

All of a sudden, the inmates had an unbelievable realization:  “OMG… we can control our emotions.”

We’ve been told that we can’t control our emotions.

That’s why there are many people in prison now—they’re there because they couldn’t control their emotions.

Let me end by sharing about what I shared at the start of my talk—the deadliest toxic emotions—toxic shame.  You see, I believe it’s the soil where other toxic emotions grow.

Funny, but I’ve never told you this before.  After preaching to you for all these years, it’s first time I’m going to share this with you.  I have a small car collection.  (I’m sure you know that I’m a businessman with many businesses.  Yes, I’m a millionaire.)

I own three Benzes.  Nope, they’re not brand new– just old models.  I also own an old Ford Mustang.  And a Buick.  Yes, I love vintage cars.  I now admit—I own a Porsche.  Again, it’s not brand new, but a good model. 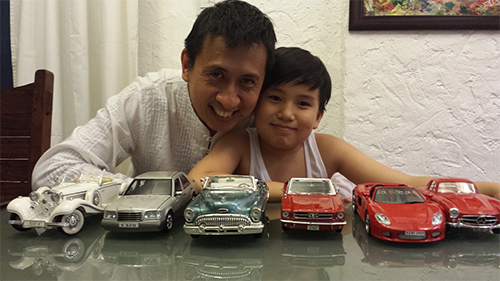 Disappointed that I can’t drive any of them?  He-he. 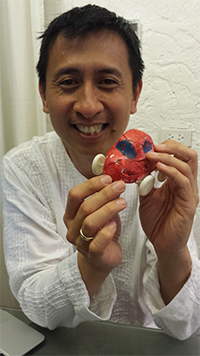 My two boys, when they were smaller, gave this car to me on Father’s Day.  They made it with their hands, using plaster.  They also painted it with watercolor.  It came with a card that said, “Dear Daddy, Happy Father’s Day.  You’re the best Dad in the world.”

If you look at the car, it’s got a lot of pockmarks, holes, and uneven edges.  It isn’t painted straight as well…

But at age 90, I bet that all my other cars will be gone—but not this car.

Friend, God looks at you like this car.  He sees your weaknesses, your failures, and your messes.  But He still says, “You’re amazing as you are.”

Listen to God.  Let his love drain out all toxic shame from your life.

P.S.: Are you broken-hearted? Do you know anyone who just suffered a painful break-up? I want to invite you to a special program called, “Wholehearted: A 90-Day Program to Help You Move On from a Break-up”. The pain from your heartbreak could cause you to carry toxic emotions way past their expiry date. Learn how to let go. Learn how to be whole again.

Bo, I want to learn more about Wholehearted. I want to move on and be whole again.

P.S. 2: Friend, how do you spend your mornings? Do you set apart special dates with the Lord? Do you take the time to get to know Him through His Word? I’d like to invite you to grab a copy of our life-changing devotionals, which are being pre-sold right now for as low as P100. Crazy, right? I know. But this pre-selling period ends tomorrow, Sept. 12, 2017, so don’t miss this chance!

Yes, Bo. I want to learn more about your life-changing resources.